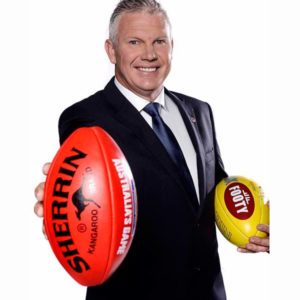 Frawley is a former Australian rules footballer playing 240 games for the St. Kilda FC and football commentator with Fox Sports.

Recruited from Ballarat, after attending St Patrick’s College, Ballarat, where he was a potato farmer which led to his nickname of Spud, Frawley initially played as a forward but soon became a renowned full-back.

He was the longest serving captain of the St Kilda Football Club and enjoyed a career from 1984–1995. He was inducted into the Saints’ hall of fame in 2007

He previously coached the Richmond Football Club between 2000 and 2004.

He is the nephew of Collingwood player Des Tuddenham and the uncle of current Hawthorn Football Club player James Frawley. Frawley currently serves at the St Kilda Football Club as a specialist defence coach on a part-time basis.