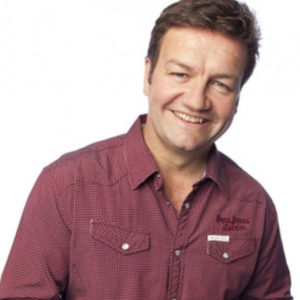 Lawrence Mooney is best known as the host of his own hilarious show, Dirty Laundry Live, on ABC TV. This edgy, irreverent, comedy panel show is in its third series and fast becoming a cult favourite. He is familiar to ABC1 audiences through his brutal honesty and sage advice on the Agony series as well as featuring on It’s a Date. Lawrence also co- wrote episodes of It’s a Date for the first and second series. Lawrence is of course first and foremost one of this country’s most celebrated Stand Up comedians nominated for The Barry Award at The Melbourne International Comedy Festival 2015 and winner of Best Show at The Sydney Comedy Festival 2015. Lawrence has hit the microphone with his unique view of the human condition for twenty one years and he is now at the top of his game. His 2015 tour of Surely Not continues to sell out and receive rave reviews. Goodness, but this is a funny man. And a man so peculiarly satisfied with his lot, I don’t think he’d give a toss if I say: he wasn’t ever anywhere near as great as he has recently become. Helen Razer – Crikey Daily Review. ★★★★½ If you want to work with one of the funniest, comically creative minds in the business then Lawrence Mooney is your man.