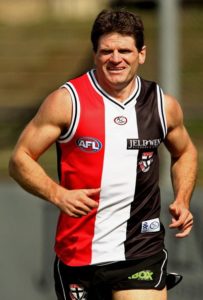 Harvey was recognized as one of the top 50 players of all time in The Australian Game of Football, a book commissioned by the AFL in 2008 to celebrate the 150th anniversary of Australian rules football. The list was compiled by Herald Sun journalist Mike Sheahan. Harvey was known for his running ability and considered one of the best short passes of 15 to 30 meters in the history of the game. He holds St. Kilda’s record for most career games. At his retirement, at the end of the 2008 AFL season, he had played the third-highest total career games in league history with 383 games. Currently, Robert Harvey ranks fifth in games played (behind Dustin Fletcher, Kevin Bartlett, Michael Tuck and Brent Harvey)

Harvey won numerous individual awards and medals during his playing career. He won consecutive Brownlow Medals, the league’s highest individual honor, in 1997 and 1998. He won St Kilda’s best and fairest award – now called the Trevor Barker Award – in 1992, 1994, 1997 and 1998. He was selected in the All-Australian team eight times, with his first All-Australian award being in 1992 and his last in 2003. He won three E. J. Whitten Medals, awarded to the player judged best player on the ground for Victoria in State of Origin matches; the 1997 AFL Players Association Most Valuable Player Award (now known as the Leigh Matthews Trophy); and the Michael Tuck Medal for player judged best on ground in the 2004 pre-season cup final. In 2012 he was inducted in the Australian Football Hall of Fame. On 24 September 2013, Harvey was named the AFL’s Assistant Coach of the Year at the AFL Coaches Association