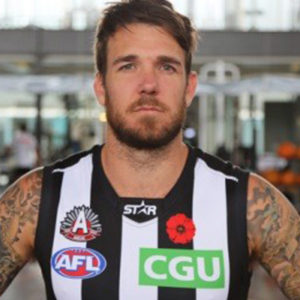 Dane Swan is a former professional Australian rules footballer who played for the Collingwood Football Club in the Australian Football League (AFL). Swan was drafted with pick 58 in the 2001 AFL draft, and made his debut two years later. Despite having a slow start to his career, being unable to hold down a spot in the side for the bulk of his first three seasons, Swan has since become recognised as one of the greatest midfielders in the modern era. Since his breakout season in 2007, Swan has become a premiership player, a Brownlow Medallist, a three-time Copeland Trophy recipient, and a five-time All-Australian, and in 2010, won the Leigh Matthews Trophy as the league’s most valuable player. Known as a prolific ball-winner, Swan averaged almost 27 disposals per game over his career.