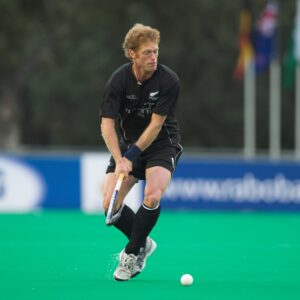 Dion is a leading architect for sports, community and recreation facilities across Australia and NZ.

A former Black Stick, Athens Olympian, and with multiple Commonwealth Games under his belt, Dion has an innate knowledge for sports and community environments, shaped by years of personally living and breathing real-life facilities across the globe.

In 2002, the NZ Hockey Player of the Year won a silver medal at the Manchester Games, losing to Australia in a blazing final (it was that Australian team that went on to win gold at Athens two years later!)

Since retiring from international hockey in 2005 with an astonishing 169 international caps – at the time the 4th highest capped NZ player – Dion has been an accomplished local club coach, as well as part of many, many successful regional high performance u21 and NHL campaigns.

Under Peter Miskimmin as Head Coach, Dion landed a role as a coach-manager of the NZ Blacksticks u21 team through their successful Junior World Cup Campaign in 2008.

In non-playing roles Dion has served his time on the NZOC Athletes Commission, the FIH Oceania Competitions Committee, and was instrumental in establishing the NZ Hockey Players’ Association, mirroring the rugby and cricket players’ bodies – a break-through for hockey at the time.

In 2009, Dion turned the corner professionally to successfully combine his two foremost passions: sports and architecture. By establishing 106 Architects, Dion has set a clear focus and speciality to blend the high-performance and grass-root sport environments in our everyday facilities.

The idea that the high performance, informal, and grass-roots communities can co-exist is central to Dion’s thinking. Where the fields and courts of play are as linked – and as important – as the buildings which service them. And where good design is as much about being fit-for-purpose, as it is to encourage a sense of community and social connection.