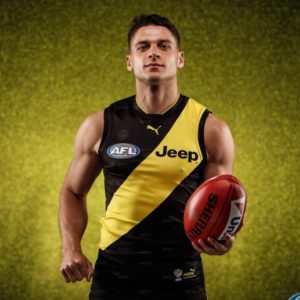 Dion Prestia is a professional Australian rules footballer playing for the Richmond Football Club in the Australian Football League (AFL). He previously played for the Gold Coast Football Club from 2011 to 2016 and was a member of the club’s inaugural side, playing its first AFL match in 2011. In 2017 he was an AFL premiership player with Richmond.