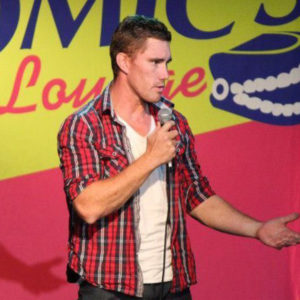 Evan Hocking is an up and coming stand up comedian with a huge career in front of him. Ask Hocko what he loves doing in life and he’ll say “making people laugh and having a cold one after”. Hocko is your average Joe knock about bloke who happens to be hilarious when he has an audience in front of him. Starting his entertainment career on radio in Port Douglas, his show “Unnecessary Noise with Buddah” gained a cult following.

However; the thriving metropolis of Port Douglas was only ever going to hold onto Hocko for a short period of time before he moved back to Melbourne to further his comedy career. Evan has risen quickly through the Melbourne comedy ranks in the last few years and has become a regular at sporting clubs, corporate fundraisers and comedy rooms around the country. His punchy delivery mixed with observational humour and storytelling is a perfect fit for any event, and don’t don’t judge a book by its cover, even though Hocko is a bit of a lad he’s as comfortable at a packed sporting club comedy show as he is at a thousand seat corporate comedy event.

Evan Hocking is a name to watch in the Australian Entertainment industry. If you had to liken him to anyone in the Australian comedy industry then you would say Hocko is a cross between Dave Hughes and Dave O’Neil. So popular amongst his peers have Evan become, he has spent recent times travelling around the countryside supporting the hilarious Nelson Twins from Australia’s Got Talent fame. But never fear, you can catch Evan Hocking performing in his own comedy show at the 2015 Melbourne International Comedy Festival and if you cant get there then simply book him through the Classic Comedy Company for your next social club or corporate comedy event. “Pretty humorous man”- Matthew Richardson, Richmond legend