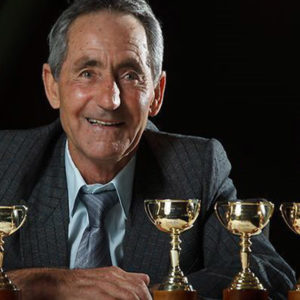 Harry White is a retired Australian jockey. He was one of the country’s leading jockeys, especially in the 1970s. He usually rode for the “cups king” Bart Cummings. He rode the winners of four Melbourne Cups on Think Big (twice) and Hyperno for Cummings and also on Arwon for George Hanlon. White was renowned for his judgment in long distance events and for sleeping in the jockeys’ room before riding in a race, no matter how important it was. His record in sprint races include wins in three Newmarket Handicaps, three Oakleigh Plates and three Futurity Stakes. White retired in 1995 and in 2003, White was inducted into the Australian Racing Hall of Fame.