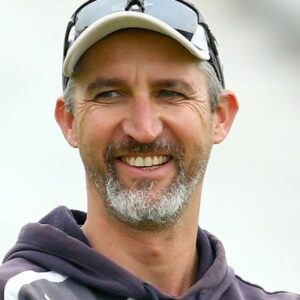 Jason Neil Gillespie is an Australian cricket coach and former cricketer who played all three formats of the game. A right-arm fast bowler, he was also a competent lower-order batsman whose unbeaten 201 in his last Test match is the highest score by a night-watchman in international cricket.

Gillespie made his One Day International debut against Sri Lanka at Colombo in the Singer World Series in August 1996, and his Test debut against the West Indies at Sydney in November 1996. He also played for South Australia, Yorkshire and Glamorgan at first-class level, and was an AIS Australian Cricket Academy scholarship holder in 1995.

Gillespie announced his retirement from first-class cricket in Australia in February 2008. He then played in the unauthorised Indian Cricket League for the Ahmedabad Rockets. At the end of the 2008 English domestic season he retired from all first-class cricket.

Gillespie became a coach in Zimbabwe in August 2010. He worked primarily with the MidWest Rhinos, but also on “grassroots” activities to improve the performance of young players in Zimbabwe.

Gillespie was drafted in as the bowling coach of Indian Premier League team Kings XI Punjab after their opening match against Pune Warriors in April 2011.

In November 2011, he was named first-team coach of Yorkshire after a shake up in the club’s coaching system. In his first season with Yorkshire, they were promoted from Division Two of the County Championship; in the second they were runners-up in the first division; and they won the title in 2014 and 2015, when he was one of the candidates to coach England. He returned to Australia after Yorkshire narrowly missed out on a third successive title in 2016.

In April 2015, Gillespie was named as the coach of the Adelaide Strikers team in the Big Bash League.

In 2018, Gillespie took up the position of head coach of Sussex.

In August 2020, Gillespie was appointed the new coach of South Australia.

In 2021, Gillespie was named an Australia Post Legend of Cricket.