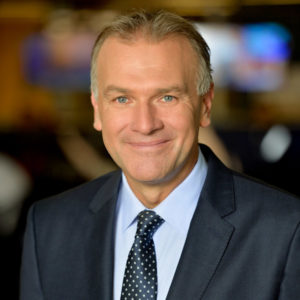 Jim Wilson is Seven News Sydney’s Sports Editor. He presents sport for Sydney’s Seven News on Fridays and Saturdays as well as Seven’s Afternoon News and the 11.30 National bulletin.

A self-described “sports nut”, Jim grew up on Queensland’s Gold Coast and has worked as a journalist for more than 30 years, starting as a cadet at Brisbane’s Courier Mail.

During his career as a sports journalist, Jim has covered and hosted some of the most significant sporting events of recent times including eight Olympic Games, Paralympic Games, the British Open golf, South African and West Indian cricket tours, World Cup soccer, the NRL State of Origin series, AFL Grand Finals and most recently hosting the Big Bash League.

Jim has been part of the Seven Sports team since 1992, holding senior correspondent and hosting/reporter positions in Brisbane, Melbourne and Sydney.

“It really is the best job in the world”, says Jim. “I am passionate about sport and life. I love live television and there’s nothing like breaking news and covering the best sports events around the world.”

Jim is a passionate supporter of several charities committed to cancer research, having lost his youngest son, Sam, to brain cancer in 2010 when he was just six years old. He is an ambassador for Cancer Council NSW and The Charlie Teo Foundation.

“Sam was an incredible boy who deserved better but his attitude towards life and his courage defied his age and he drives me every day – his memory will live on forever,” says Jim.

Besides being sports mad, Jim is a foodie and describes himself as a “coffee purist”.

Jim is married to journalist Chris Bath and proud father to sons Joey and Darcy.