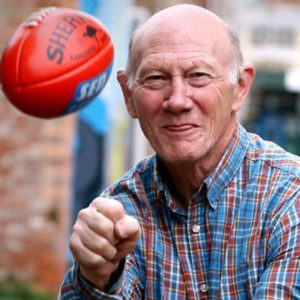 Kevin Bartlett is a former Australian rules footballer and coach who played in the Victorian Football League between 1965 and 1983 for the Richmond Football Club. With 403 games he has played the third highest number of games in VFL/AFL history. He won five premierships with Richmond, and won their best and fairest medal five times. Following his retirement as a player, Bartlett developed a successful career as a sports commentator and broadcaster on both television and radio. He was a member of the AFL’s rules committee for many years until he retired on 4 March 2014. as well as the selection panel for the All-Australian Team and AFL Rising Star awards.