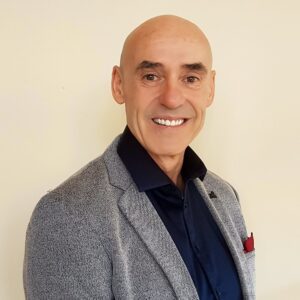 Mark Eustice is a former Australian Rules Footballer who played with Essendon, Richmond & the Sydney Swans in the VFL/AFL.

Mark, who played his first VFL game at just 17 years of age, never played more than nine games in a season while at Essendon. He was a member of the reserves premiership winning team of 1983 and played in Essendon’s 1984 night premiership, but never participated in a VFL finals series. Used in a variety of positions, he often appeared as a wingman or half forward.

He received a clearance to Richmond for the 1985 season and found himself regularly selected for the seniors. He played 18 games that year and earned the first Brownlow Medal votes of his career when he kicked four goals in a win over Fitzroy. In 1986 he was Richmond’s third leading disposal getter, averaging 20 a game. He made 18 appearances in 1987 and again found a lot of the ball, but it would be his last completed season at Richmond. Eight rounds into the 1988 season and after serving a two-week suspension for headbutting former teammate Steven Clarke, Mark was sacked by Richmond. He completed the season with Sydney, playing five games.

At Sydney he played mostly as a back pocket defender and appeared in the opening 20 rounds of the 1989 season before a broken jaw ended his year. He spent two further years with the Swans before being delisted but remained in the city and played for North Shore in the Sydney Football League.

In 2010 Mark was the subject of media attention when he revealed that he had undergone rehabilitation for long term drug abuse and was suffering from bipolar depression.

To cope with this depression he began to heavily use alcohol and drugs of all types. Over time these became fully fledged addictions that took over his life and led to dire consequences; namely the break up of his close relationships, financial ruin, poor physical health and further mental health issues. He lost everything and in one doctor’s opinion was close to death. Fortunately he was persuaded by friends to enter a rehabilitation facility. This turned out to be a successful endeavour and a pivotal time in his life. His mental condition was properly diagnosed and treated and he has been drug free and sober for ten years.

Now Mark uses his experience to help others. While experts and statistics can help you understand the ever growing issues of mental health and addiction, Mark’s raw and honest story provides a riveting example of how easy it is to fall and what it takes to successfully come out the other side.