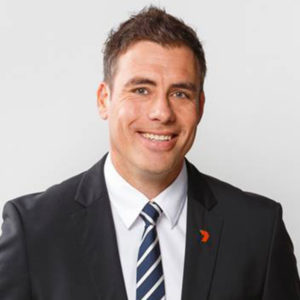 Matthew Richardson is a retired Australian rules footballer and current media personality who represented Richmond in the Australian Football League. Richardson is known for his marking prowess, speed and work rate. He was the club’s key forward through the mid-1990s and the 2000s. He led the club’s goalkicking for thirteen seasons, and was selected in the All-Australian Team three times – in 1996, 1999 and 2008.

Richardson’s 800 career goals currently see him ranked second behind Jack Titus at Richmond, and eleventh on the all-time list of AFL/VFL goalkickers. He also holds the record for most goals kicked without winning a Coleman Medal. He currently holds the record for the most goals kicked at the Melbourne Cricket Ground. Richardson was one of the most popular players in the competition, this was shown when the crowd at the 2008 Brownlow Medal cheered every vote he got. Mark Robinson from the Herald Sun wrote “M. Richardson… I’m sure there wouldn’t have been a more popular winner”.

Following his retirement at the end of the 2009 AFL Season and during parts of the 2009 AFL Season when he was injured, Matthew was an AFL expert commentator for telecast matches and a panellist on the review show ‘One Week at a Time’, both Network Ten shows. As from 2010 Richardson became part of the Seven Network AFL telecast team, initially as a boundary rider and then as a member of the Friday and Saturday night commentary teams, providing expert comments.

He also appears on the Thursday night edition of Seven News Melbourne, to preview the weekend’s AFL action, and as a panellist on Channel 7’s AFL Game Day. In 2010 Richardson joined the 3AW Football radio commentary team in a special comments role. Richardson can also works for the Richmond Football Club’s media department; presenting their ‘Talking Tigers’ weekly podcast show and other videos on the club’s website.