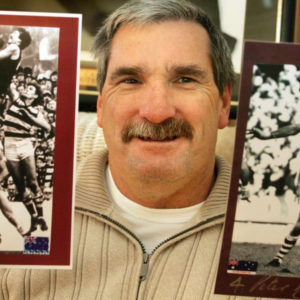 Known as ‘The Buzz’, Bosustow was a flamboyant character who regularly took big marks. Despite only playing 65 games over three seasons in the VFL, he kicked 146 goals and played in two premiership sides in 1981 and 1982. He is best remembered in the VFL for winning both Mark and Goal of the Year in 1981. At Princes Park, Bosustow flew high above a pack at full forward to take a screamer on his chest to claim the Mark of the Year. Goal of the Year came at VFL Park: Bosustow smothered a clearing kick from a defender 15 metres around from the behind post, regathered the ball, and swung around on one step to kick a high goal over his shoulder.