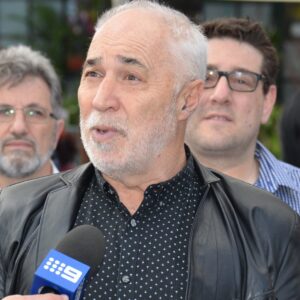 Phil Cleary is an Australian commentator on politics and sport, particularly Australian rules football, and a former independent politician elected at the 1992 Wills by-election. Phil first came to notice as a prominent player and coach in Victoria’s second-level Australian rules football competition, the Victorian Football Association, for the Coburg Football Club. He debuted with the club in 1975, playing 205 games – second only to Dave Starbuck in Coburg club history – and kicking 317 goals.

He was a member of the 1979 premiership side and losing 1980 side. He coached the club between 1984–92 (captain coach between 1984–87, upon which he retired as a player), before leading them to back-to-back premierships in 1988–89. In the 1986 VFA grand final against Williamstown he was sensationally ordered off, only to be found not guilty at the tribunal. He coached the VFA representative side on five occasions without losing a game. He was one of the most well-known players in the VFA in his era, and was instantly recognisable from the thick beard he wore throughout his career.

Cleary has been a part of the ABC’s telecast of VFA/VFL football as a match-day commentator since 1987, juggling coaching and commentary duties for the first five seasons. He now conducts interviews and acts as a boundary rider for the match of the day, writes a weekly column for the football magazine Inside Football and regularly appears in the media on a range of social and political issues. He has campaigned to stop male violence against women since his sister was murdered by her former partner in 1987. He is a freelance journalist and public speaker and is the author of three books, Cleary Independent, Just Another Little Murder, and Getting Away with Murder. He currently works as communications manager for the Electrical Trades Union.