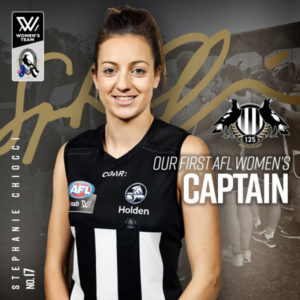 It’s been 10 years since Stephanie Chiocci began her career at Diamond Creek Women’s Football Club. Since then Steph can be considered something of a poster girl for just how far women’s football has progressed. In 2006, Chiocci joined a club that, at that time, had not even been reliably provided with a changeroom. But, she won the Victorian Women’s Football League’s best first year player award in a premiership-winning side.

It was a prophetic beginning for a player who would go on to be AFL female ambassador for Victoria, pull on the Big White V four times, be selected in four all-Australian sides and play for the Western Bulldogs in every AFL women’s exhibition match since its inception in 2013 as well as captaining the Western Bulldogs during the 2016 finals bye round. In 2017 Steph was recruited by Collingwood FC and was awarded captain of the team.