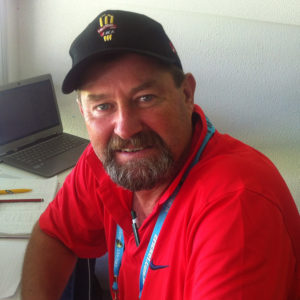 Terry Alderman is a former Australian international cricketer who played primarily as a right-arm fast-medium bowler.

He began his first-class cricket career in 1974 with Western Australia in the Sheffield Shield and came to international prominence when he was chosen for the Australian national team to tour England in 1981. He was a poor batsman, passing fifty just once in his career and averaging barely eight in first-class cricket. He had three seasons in English county cricket, with Kent County Cricket Club in 1984 and 1986 and with Gloucestershire County Cricket Club in 1988.

In the 1981 Ashes series he took 42 Test wickets, including nine on debut, the biggest haul in a series since Jim Laker’s 46 in 1956 and the fourth-highest total of all time. Alderman’s 42 wickets is the record for the most wickets taken in a series without taking 10 wickets in a match. He was named as a Wisden Cricketer of the Year in the Almanack’s 1982 edition.

He was injured and unable to play for over a year by a shoulder injury sustained on 13 November 1982 when he rashly tackled an English-supporting ground invader at the WACA Ground in Perth.

Alderman took part in an unofficial Australian tour of South Africa in 1985–86 and 1986–87, when that country was banned from Test cricket as a Commonwealth anti-apartheid sanction. As a result, he received a 3-year ban from international cricket which disqualified him from playing in the 1985 Ashes series in England.

Following his suspension, Alderman returned to the Australian side and resumed his success against England, taking 41 wickets in the 1989 Ashes series and another 16 in the 1990–91 series, his final Ashes appearance. He rarely enjoyed similar success against other countries. His final Test series was against the West Indies in 1990–91, where he ended his career with 170 Test wickets.