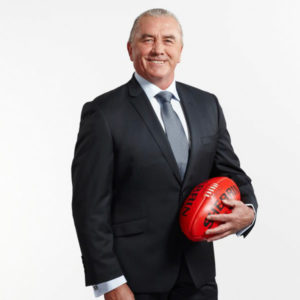 Tony Shaw is a former Australian rules footballer, coach and media personality. In 1990, Shaw captained the club to a historic premiership, the club’s first in 32 years, defeating Essendon. Shaw’s 35 touches saw him earn the Norm Smith Medal as best on ground. In the same season, Shaw won his second Copeland Trophy. In 1991, against the Brisbane Bears, Shaw had 50 disposals, which was at the time the second most disposals recorded in a game by a single player (trailing Greg Williams’ record of 53 set in 1989). Shaw retired in a tearful farewell with 313 VFL/AFL games and 159 goals.