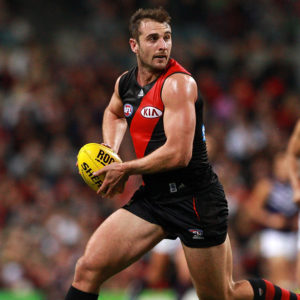 Jobe Watson is a former professional Australian rules footballer who played for the Essendon Football Club in the Australian Football League (AFL). Watson, the son of three-time Essendon premiership champion Tim Watson, was drafted by Essendon under the father–son rule in the 2002 national draft, and went on to become one of the greatest midfielders of the modern era. A dual All-Australian and three-time W. S. Crichton Medallist, he captained Essendon from 2010 to 2015, and was the face of the Essendon playing group during the most turbulent period in the club’s history.

Watson was one of thirty-four players suspended as part of the Essendon Football Club supplements saga. Watson originally won the Brownlow Medal during that season as the league’s best and fairest player, but he was later ruled ineligible in 2016 as a result of the suspension and announced that he would hand back the medal. He was suspended for the entire 2016 AFL season, before returning the following year; he then played for one more season before retiring.