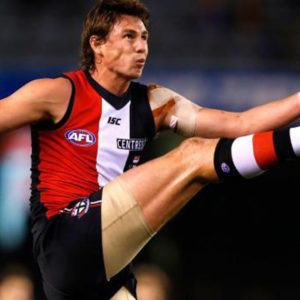 Recruited in the 2000 AFL Draft at pick number two, there were high expectations on Koschitzke from a young age. His athletic 197 cm build and strong marking were a great asset to the St Kilda Football Club, which drafted him and gave him his AFL debut early in 2001. He made an immediate impact and, in a debut year where he played 20 games, he won the AFL Rising Star award. Koschitzke was considered a versatile key position player who can play at centre half-forward and centre half-back, as well as a ruckman. As of the end of the 2010 season, Koschitzke had played 200 games including 14 finals matches and three grand finals.