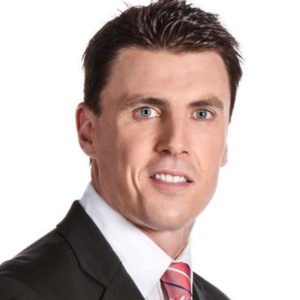 Matthew Lloyd is a former professional Australian rules footballer, who played for the Essendon Football Club in the Australian Football League (AFL). A highly decorated full-forward, Lloyd’s AFL’s honours include being the all-time leading goalkicker in the history of AFL, seventh-highest goalkicker in VFL/AFL history, three Coleman Medals as leading goalkicker in the league, AFL life membership, as well as winning both the Mark of the Year and Goal of the Year awards. Among his representative honours are five All-Australian selections, three times representing the Victoria State of Origin team, as well as twice representing Australia in International rules football.

Lloyd has kicked over 100 goals in a season – twice. He also belongs to the small group of players whose first kick in the AFL resulted in a goal Lloyd co-hosted children’s AFL show Auskick’n Around on Fox Footy Channel with Brad Johnson from the Western Bulldogs from 2003 until it was cancelled at the end of 2005. In 2006 Lloyd had a weekly spot as a panelist on Fox Footy’s White Line Fever and after being forced to spend extended time off the field because of injury, he became recognised for his informative views on all things football – his roles included being a special comments commentator on Triple M’s football coverage as well as more regular appearances on The AFL Footy Show, as a panelist.

In 2009 Lloyd appeared as a regular panelist on a new show, One Week at a Time, as well as doing special comments on Network Ten and writing a regular column for The Age newspaper. Following his retirement Lloyd has been heavily involved in the media. Lloyd signed with the Network Ten AFL team as an expert commentator for the 2010 and 2011 AFL seasons on Channel Ten and One HD (he had already provided special commentary during various matches of the 2009 AFL season for the network), until Ten Sport lost the rights at the end of the 2011 AFL season.

He also worked for radio station SEN, was a co-host of The Game Plan on One HD during 2011 and continued working for The Age. Lloyd’s autobiography (co-authored with Andrew Clarke), Straight Shooter, was released in July 2011. After Network Ten lost the AFL broadcasting rights, Lloyd joined the Nine Network for 2012 to be a panelist on The Footy Show and The Sunday Footy Show. He also left SEN to join 3AW’s AFL special comments team. In 2013, he joined Footy Classified as a panelist alongside Gary Lyon, Craig Hutchison and Caroline Wilson; as well as continuing his regular roles on The Sunday Footy Show and 3AW Football. Lloyd is also a recurring panelist on The Footy Show.