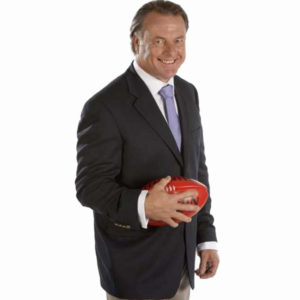 Russell played 50 games, kicking 51 goals for Geelong until he left the club at the end of the 1991 AFL season.

Russell initially considered returning to Port Adelaide to finish his career but instead coached in country Victoria for a few years before retiring from football.

In 2002 Channel Nine gave Russell the main caller’s role for Sunday afternoon AFL matches before being promoted to the network’s calling team for Friday night matches in 2006.

His other main occupation is as co-host of radio station 3AW’s top-rating drive-time sports show, Sports Today with Gerard Healy.

After leaving the Nine Network, Russell received a contract with Fox Footy to call two weekly AFL matches for the Pay-TV provider for the 2007 AFL season and beyond, under the new AFL TV Rights Deal, of which Fox Footy has four matches weekly during the Home and Away season to cover.

In 2012, Russell joined the Friday night 3AW football team while continuing to host Sports Today for the station.