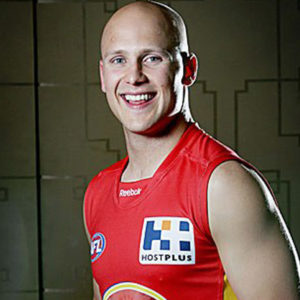 Gary Ablett Jr. is a professional Australian rules football player and is currently the Captain (Australian rules football) of the Gold Coast Football Club in the Australian Football League (AFL). He also previously played with the Geelong Football Club. The eldest son of Australian Football Hall of Fame member and former Geelong player Gary Ablett Sr., Ablett was drafted to Geelong under the father-son rule in the 2001 AFL draft. He made his debut in 2002 and has since become recognised as one of the AFL’s best midfielders. Ablett is a dual premiership player, a dual NAB Cup winner, a dual Brownlow Medallist, a record five-time recipient of the Leigh Matthews Trophy as the AFL Players Association’s Most Valuable Player, a three-time recipient of the AFL Coaches Association ‘Champion Player of the Year’ award, and an eight-time All-Australian. Following his departure from Geelong, Ablett was a two-time Carji Greeves Medallist, a recipient of the club leading goalkicker award, a life member of the club, and had been inducted into the club’s Hall of Fame.