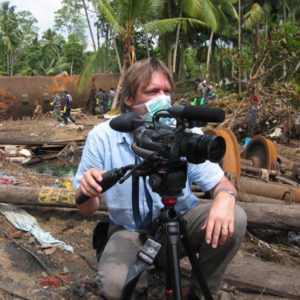 Greg Morgan has travelled the globe reporting on major news events for a host of Television broadcasters.

He has directed and produced countless documentaries for National geographic and the BBC.

Over his career as a cameraman and TV journalist he has covered the Iraq and Afghanistan conflicts (including broadcasting pictures to the world of Saddam Hussein being captured) and covered the catastrophic South Asian tsunami in 2004 and directed a film with Jackie Chan, the king of Kung Fu!

He has been privileged to travel with Pope John Paul II, Bill Clinton, the Dalai Lama, Princess Diana and Mother Theresa.

With a number of awards under his belt including a TV Logie Award, Greg was recently awarded executive of the year in communications by the worldwide who’s who organization

He has survived being shot at, bomb blasts but most recently given 6 months to live after being diagnosed with bowel cancer. Another battle he survived after 12 months of grueling chemotherapy.