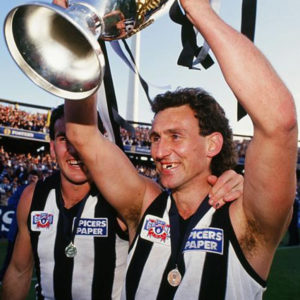 Daicos played his entire 250 game career with the Collingwood Football Club in the VFL/AFL.

He is one of the greatest players in the history of the Australian Football League, being a member of the AFL Hall of Fame and was renowned for his consistent ability to kick freakish goals from seemingly impossible angles. During his 250-game career his league honours include a premiership, and kicking the Goal of the Year. He also represented his home state of Victoria a total of five times.

Daicos is considered to be one of Collingwood’s all-time greats, being named in the club’s Team of the Century, leading the club’s goalkicking for five seasons, winning the best and fairest twice and playing in the club’s drought breaking 1990 premiership.